Yesterday was a flurry of activity that I’m still trying to make heads and tails of.

For some reason my mom thought it would be a good idea to go to a humane society a couple of counties over and pick up a collie/pyranees puppy that had just come in. So I said alright, sure – my friend has a pup like that and he’s pretty good.

We left our house around 10:30 am to get to the shelter before it opened at 12 pm. Unfortunately, about ten other folks ahead of us had the same idea.

I searched the society’s website to see if there might be another pup I’d be interested in. I came up with two – a cattle dog and a chocolate lab.

The cattle dog didn’t work out, snapping at folks (and me!) and lunging at passing cars. It’s not his fault – the poor guy was scared to death and who knows what situation he came from.

We continued to wait. The line of cars ahead and behind us thinned out as news traveled that the puppies had already been spoken for. That left about four cars in a line of roughly twenty.

Thankfully no one besides us had asked to meet the chocolate lab yet.

At 3/4 years old, housebroken, friendly, and good with practically anything so far, this chunky dude has already stolen our hearts.

There is a transition period – we’re not used to having an indoor dog after about 6 years and its been about 6 months since my old dog of 15 years past away.

But he’s already settled in nicely. Even my dad is smitten with him. 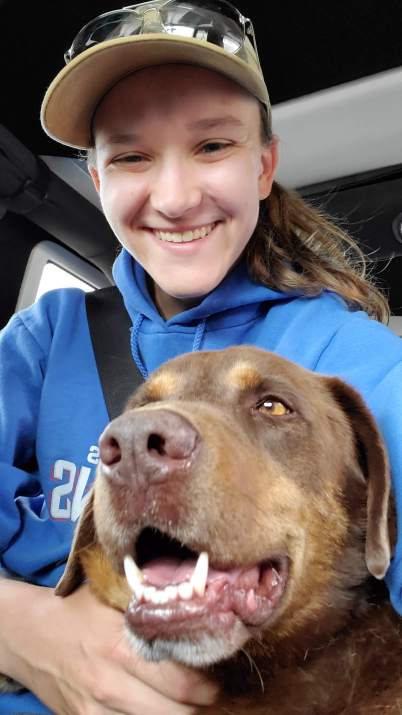 Welcome to the family, Ranger.